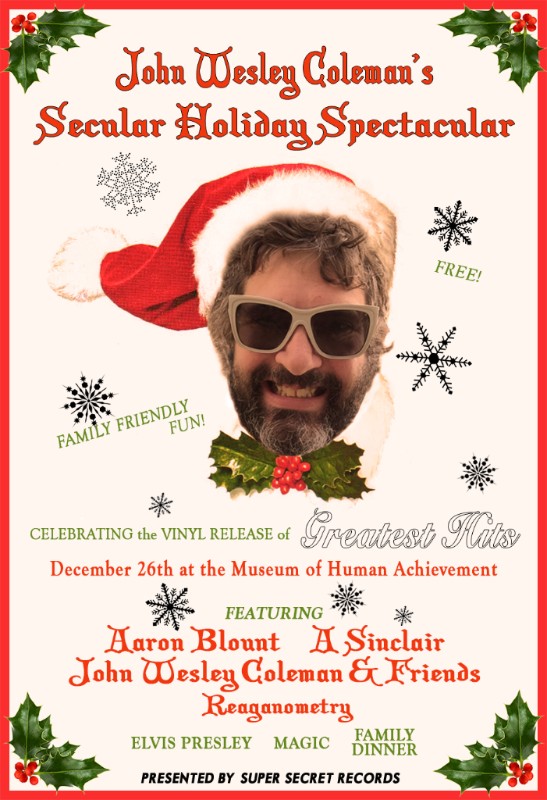 Austin’s resident mystery pop honky tonk wizard – also know as John Wesley Coleman III – is bringing an extra dose of non-religiously affiliated cheer this season with his first ever Secular Holiday Spectacular, to be held December 26th at the Museum of Human Achievement. Aaron Blount (of Knife in the Water), A. Sinclair, Coleman and special guests will provide musical merriment, and a special appearance Elvis Presley. Coleman will act as the host for the evening in the vein of America’s patron saint of Christmas specials – Bing Crosby. The event will also celebrate the vinyl release of Greatest Hits, the latest release from the ever-prolific artist on local label Super Secret Records, with half of proceeds from sales will go to charity. Food will also be provided and guests are welcome to BYOB.

Coleman is a prolific Austin-based garage pop singer- songwriter who has many solo full-length records under his belt and counts himself as a member of psychedelic 5-piece The Golden Boys. His interactive, kid-friendly tracks touch on topics from the surreal to the mundane, and frequently looks to his (almost) 2 year old daughter Zoe for inspiration. The native Texan released his newest record Greatest Hits in October, which chronicles his evolution as an artist as he enters into new creative turf – becoming a new father. The album received positive attention from the Austin Chronicle (the piece also features an adorable photo of Coleman and his daughter!), The Austin-American Statesman, and Austin Monthly, which noted that “Like all great songwriters, John Wesley Coleman III works between timeless universality and fresh phrasings, creating sentiments that feel familiar but sound original.”

Attendees must fill out this following form in order to receive the full address of the Museum of Human Achievement: http://www.themuseumofhumanachievement.com/member.
Join us for a night of wonderment and winter-oriented jubilee as we herald the vinyl release of Greatest Hits and the season of giving!