My Little Pony: Friendship Is Magic – Adventures in the Crystal Empire is coming to DVD December 4th 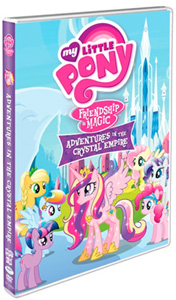 My Little Pony: Friendship Is Magic – Adventures in the Crystal Empire is priced at $14.97 SRP and is now available for pre-order at Amazon.