AUSTIN, TX – Wednesday, October 9, 2013 – Drafthouse Films announces a first-time theatrical platform release for the full-length cut of the phantasmagoric 1979 sci-fi/horror hybrid The Visitor. The film will open in a dozen cities starting Halloween weekend before rolling out into additional markets throughout November and the rest of the year. The repertory title will be hitting the big screen in major markets including Los Angeles, New York, Austin, Boston, Chicago, Dallas, Denver, Houston, Portland and San Francisco. A VOD/digital and home entertainment release will follow in January, 2014. 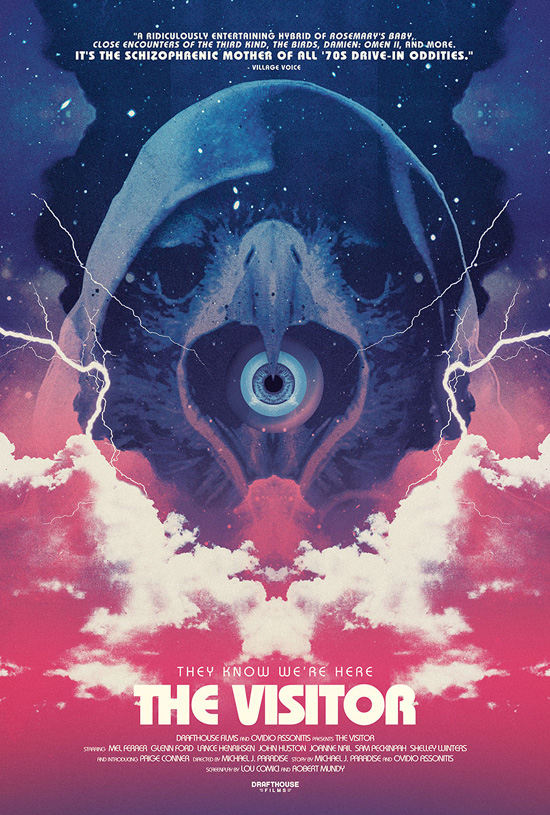 Legendary Hollywood director/actor John Huston (The Maltese Falcon; Treasure Of The Sierra Madre) stars as an intergalactic warrior battling alongside a cosmic Christ figure against a demonic eight-year-old girl and her pet hawk, as the fate of the universe hangs in the balance.
In the dawn of ’70s American blockbusters, European production companies emerged stateside, attempting to recreate box office gold by cloning Hollywood. The infamous Supreme Court-banned Jaws copy Great White, The Exorcist-esque Beyond The Door and countless others were packaged for export and the burgeoning drive-in circuit. Producer Ovidio G. Assonitis and Director/Alleged Bodybuilder Michael J. Paradise’sTheVisitorstands as perhaps the most ambitious of all, taking its inspiration by artfully fusing The Omen, Close Encounters Of The Third Kind, The Birds, Rosemary’s Baby, The Fury and Star Wars alongside a baffling cast that includes Shelley Winters (NightOfTheHunter), Glenn Ford (Superman), Lance Henriksen (Aliens), Franco Nero (Django) and Sam Peckinpah (director of TheWildBunch).
The result is not so much a carbon copy of these films, but rather an entertainingly hallucinatory and inscrutable mash-up that repertory cinema programmers around the country have rediscovered for late-night bookings. “Just when you think you’ve nailed down which direction the film is heading in, it completely shatters your notion of the time-space continuum,” says LA art-house The Cinefamily. The Village Voice also calls the film “ridiculously entertaining [and] a schizophrenic mother of all ’70’s drive-in oddities.”

“This film is from another time, another place and a wholly different dimension,” says Drafthouse Films Creative Director Evan Husney, “and contains the highest JDPM (jaw-drops-per-minute) ratio out of any movie we’ve ever encountered. The Visitor is a repertory mainstay at the Alamo Drafthouse and is truly one of the most joyfully delirious theatrical experiences we’ve unleashed on our audiences. The world wasn’t ready for this film in 1979, and it still may not be. Regardless, we are ecstatic to reintroduce cinema’s most colossally bizarro achievement. Ever.”