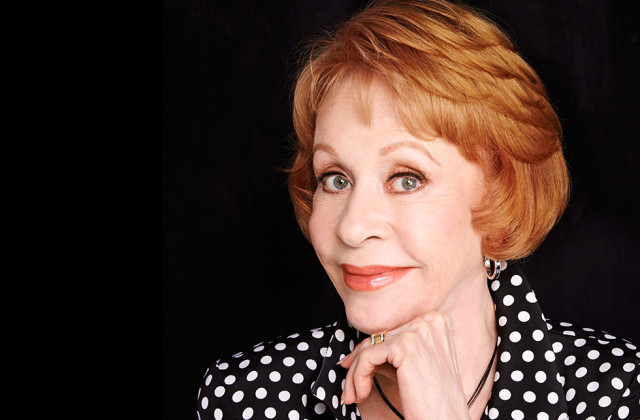 Ever wanted a one-on-one with the legendary Carol Burnett? Now’s your chance! Theward-winning actress, best-selling author, and American icon returns to the Long Center for the first time in nearly five years in a brilliant, impromptu story-telling format that grew out of the hilarious question and answer sessions she shared with her studio audience for 11 years on “The Carol Burnett Show.” Don’t miss this rare opportunity to talk to Carol in the same enjoyable and intimate audience-interactive format! Tickets are on sale now and start at $59.

Carol Burnett, an award-winning actress and best-selling author, is widely recognized by the public and her peers for her work for her comedic and dramatic roles on television, film, and Broadway, most notably The Carol Burnett Show. Named in 2007 by TIME magazine as one of “100 Best Television Shows of All Time,” The Carol Burnett Show ran for 11 years, averaged 30 million viewers per week, and received 25 Emmy Awards, making it one of the most honored shows in television history.

Currently, Carol is focused on three major projects. The first is the long awaited release of the initial five seasons of The Carol Burnett Show. These “lost episodes” have never been seen nor distributed since their initial broadcast and will for the first time be combined with the already available episodes from Seasons 6 – 11. Rollout commences August, 2015. On the filmed entertainment front, Ms. Burnett is in active development with CBS Films on a theatrical project originated by her late daughter, Carrie, entitled Sunrise in Memphis. In the publishing arena, Ms. Burnett is in the midst of writing her fourth book entitled In the Sandbox which is a poignant love letter to the golden era of television while simultaneously dissecting the elements of what made The Carol Burnett Show the iconic success that it was. This publication is scheduled for release in November, 2016.

If there is one thing this renowned entertainer can do better than anyone else, it is talk at length, impromptu, before a live audience. This is a great evening of fun, nostalgia and true reflections.

Tickets are available at TheLongCenter.org or by calling (512) 474.LONG (5664). Also available at the Long Center’s 3M Box Office located at 701 West Riverside Drive at South First Street. For groups of 10 and more, please call 512-457-5161 or groupsales@thelongcenter.org.