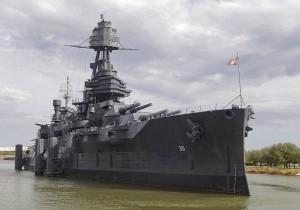 LA PORTE – On the opening weekend of the Hollywood blockbuster “Battleship” come be a part of history as we celebrate the centennial of the launching of the nation’s oldest battleship.

Battleship TEXAS was launched May 18, 1912 and will be celebrating 100 years afloat with a cake cutting ceremony on May 19 at 2 p.m. aboard the ship in La Porte. The crew asks visitors to confirm their attendance by calling the ship at 281-479-2431.

“We are so proud to celebrate this monumental occasion,” said Andy Smith, ship manager.

No other battleship has celebrated their centennial, and we hope our dedication to preserving this national treasure will honor the memories and stories of the men who served aboard this vessel.”

The ceremony will be about half an hour and will feature a cake cutting by Emma Ward, the great-great granddaughter of the original woman to christen the first battleship and a keynotes speech on veterans and their families by Lt. Gov. David Dewhurst.

After the 30 minute ceremony the Texas Army will give a munitions salute with three cannons onboard the ship and an artillery piece and muskets on shore.

“Memorials like the Battleship TEXAS remind us of the great sacrifices and extraordinary lengths that generations of our heroes went to defend our freedom and safety,” said Lt. Gov. Dewhurst. “Battleship TEXAS is not just a ship; it is a valuable piece of American history. I am honored, humbled and proud to have been invited to the centennial of her christening.”

The Battleship TEXAS served the country in both World War I and World War II and was the only battleship to serve in all theaters during the last world war. After her lengthy active military service she became the first battleship memorial museum in the nation. She was presented to the State of Texas and commissioned as the flagship of the Texas Navy on San Jacinto Day, 1948 and retired on the site of the San Jacinto Battleground, the state’s most significant victory. She has served as a museum memorial since 1948 and is anchored on the Buffalo Bayou and the Houston Ship Channel.

The Texas Parks and Wildlife Department became the steward of the ship in 1983. The ship is  a part of the department’s 1,200 acre San Jacinto Battleground State Historic Site, which holds the battleground, battleground monument and the battleship.

In her retirement she has welcomed millions of visitors and has been designated a National Historic Landmark and a National Historic Mechanical Engineering Landmark.  As folks walk the wooden decks surrounded by heavy steel they are reminded of the flesh and blood crew that served aboard her and that the price for Liberty and Freedom is never completely paid. Join as we honor the ship and the crew that served aboard her.

Paul Schubert, author of “Come on Texas,” famously wrote of the vessel “she was a ship – the smartest man o’ war afloat, and the best.  A hard, tough, salty, shootin’, steamin’, fool.  A trophy grabber, a fighter and a he-man battlewagon.”

The ship was featured in the movie “Pearl Harbor,” and most of the naval scenes were shot on her decks. Today the ship’s crew joke to tourists by pointing out a random bench and declaring it to be the very bench Ben Affleck sat on.

Information about current restoration and preservation plans for Battleship TEXAS State Historic Site can be found at http://www.dryberthTEXAS.com.