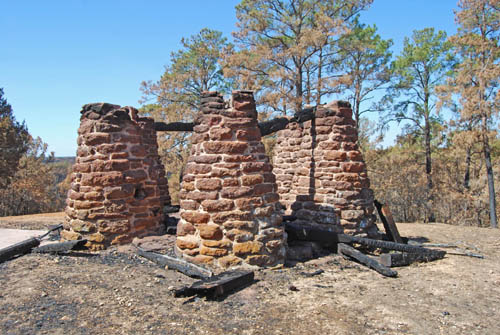 As many of you know there was a huge fire in Bastrop Texas not too far from where I live. I could see the smoke from my home. The smoke billowed over my parents house and it as a terrifying moment I will not soon forget. However there were 100’s of people who were directly effected and 2 lives were lost.

AUSTIN, TX – As one of only 11 recipients nationwide, Texas Parks and Wildlife Department’s Historic Sites branch was recently awarded a $25,000 grant from the National Park Service to study the effects of the Bastrop fire on Bastrop State Park’s historic structures built by the Civilian Conservation Corp.

Despite that almost all of the park’s CCC-built structures, which date back to the 1930s, survived the worst fire in Texas history, the lethal flames and smoke came within feet of these invaluable buildings and may still have caused long-term or even unforeseen damage—hence the reason for the evaluative study.

“With the recent wildfires, I’ve learned to appreciate these historic structures even more,” said State Parks Regional Director Todd McClanahan, who was also the Bastrop State Park Complex Superintendent at the time of the fire last Labor Day. “Knowing just how close we came to losing these buildings forever forces me to admire their beauty with a different perspective. They are so much more than historic buildings, they are historic treasures.”

In addition to TPWD staff, Fran Gale, who teaches in the Historic Preservation Program at the University of Texas School of Architecture and is director of the UT Architectural Conservation Lab, and Casey Gallagher, who is a graduate of the UT program and is now an independent conservator, will help administer the program study.

Results from this research are expected to serve as an application model nationwide for other historic structures and cultural resources facing potential wildfire damage. For more information, contact Angela Reed, CCC Initiative Coordinator for TPWD, at (512) 389-8818.

Photo Cutline: TPWD Historic Sites Branch received a $25,000 grant from the National Park Service to study the effects of the Bastrop fire on historic structures, such as this pavilion built by the Civilian Conservation Corp in the 1930s inside Bastrop State Park, which was damaged during last year’s wildfire. Results from this study are expected to serve as data that can be applied to other historic structues impacted by wildfires nationwide.