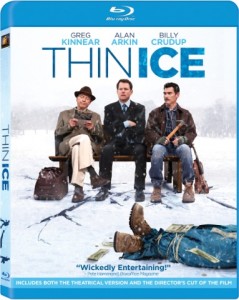 Mickey Prohaska (Kinnear) is a small-time insurance agent looking for a way to jump-start his business, reunite with his estranged wife (Thompson) and escape the frigid Wisconsin weather. This self-proclaimed master of spin believes that salesmanship is about selling a story — all he needs is a sucker willing to buy it.  He hits pay dirt with a lonely retired farmer (Arkin) who is sitting on something much bigger than an insurance commission.  But Mickey’s attempt to con the old man spins out of control when a nosy, unstable locksmith (Crudup) with a volatile temper dramatically ups the stakes, trapping him in a spiral of danger, deceit and double-crossing.

The Thin Ice Blu-ray and DVD offers three bonus features including a behind-the-scenes featurettes, deleted scenes and a look at the Sundance premiere.  The Blu-ray will feature both the theatrical and Director’s cuts of the film.   Prebook is May 16.