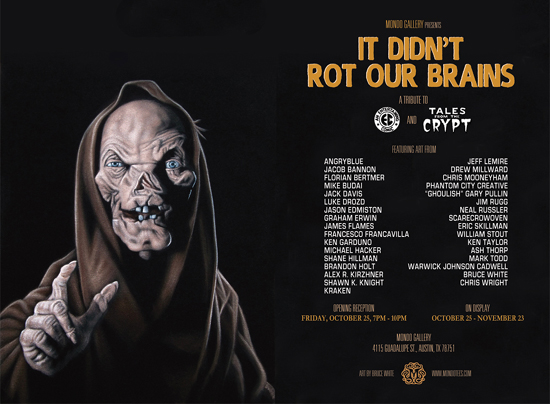 Mondo, the collectible art division of the Alamo Drafthouse, will celebrate EC Comics & Tales From The Crypt this Halloween with a gallery show that honors one of the greatest horror television shows of all time and its origins in EC Comics, which produced some of the most original and striking horror artwork.  The gallery show will feature original works of art and blood-drenched screen prints and will run from October 25th to November 23rd.

Mondo is a division of the Alamo Drafthouse championed for bringing art back to movie poster design. Utilizing the talents of world-class artists and designers, Mondo produces limited edition, screen printed posters based on all things film, television and comic properties including Star Wars, The Avengers, DC Comics, Back to the Future and Universal Monsters. In addition to stunning artwork for beloved and future classics, Mondo also releases time-honoured and contemporary movie soundtracks on vinyl, such as Drive, as well as VHS re-issues. Based in Austin, TX, Mondo operates out of a permanent gallery space hosting regular exhibitions featuring a blend of breathtaking original artwork and limited edition screen prints. Having worked with filmmakers such as Guillermo del Toro, Wes Craven, Zack Snyder and Duncan Jones, Mondo has also partnered with the Academy of Motion Picture Arts & Sciences to further archive and preserve the company’s growing collection of original film posters.