If you do not know about The Hunger Games, you must have been living under a rock! The excitement and anticipation has been building since my family walked out of the theater last year. And now it is here, only days to go before November 22nd is here and excited moviegoers will be waiting in long lines to see The Hunger Games: Catching Fire.

After winning the 74th Annual Hunger Games, Katniss Everdeen returns home to District 12 along with fellow winner Peeta Mellark. Shortly after returning home, they must embark on a “Victory Tour” of the districts, leaving behind their close friends and family again. On the day of the Victory Tour, President Snow threatens Katniss’ best friend and pretend cousin, Gale Hawthorne, outraged after she and Peeta broke the rules of the 74th Hunger Games that allowed them both to win. During the tour, Katniss senses that a rebellion is brewing in the districts, but the Capitol is still firmly in control as Snow prepares the 75th Annual Hunger Games, known as a Quarter Quell, an event taken place every 25 years – a competition that could change Panem forever.

In this Hunger Games, the tributes will be reaped from the existing pool of victors, making all the other Games look like child’s play. As Peeta and Katniss end up in the arena again (as the only victors of District 12 with the exception of Haymitch), this time surrounded by experienced and vicious killers, President Snow is determined to eliminate them and destroy the rays of hope and the sparks of rebellions brewing up in the Districts. Now Katniss and Peeta must do whatever it takes to defeat their foes and come out on top once again and ignite the flames of rebellion in Panem.

In celebration of this exciting moment in history, I have been given the opportunity to give this super cool The Hunger Games: Catching Fire prize pack to one of Central Texas Mom readers! 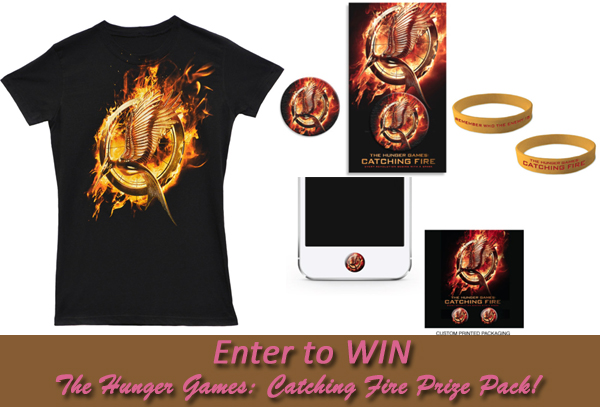 The Catching Fire prize pack is:

Disclosure / Disclaimer: No monetary compensation was obtained for this post. I received a complimentary Catching Fire prize pack to facilitate this post and giveaway. The opinions expressed here are mine and may differ from yours.  I am disclosing this in accordance with the Federal Trade Commision’s 16 CFR, Part 255:  “Guides concerning the use of Endorsements and Testimonials in Advertising.