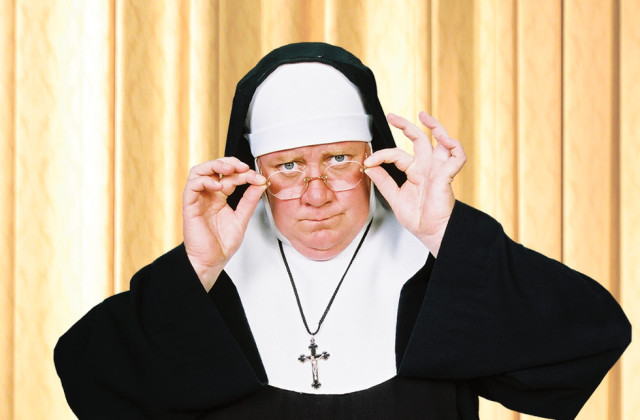 We hope you’re ready Austin, because Sister is coming to Austin to teach you a thing or two! But don’t worry, she should fit right in to the city’s “weird” vibe with her glow-in-the-dark rosaries and laminated saint cards. Late Nite Catechism is March 21-23 at The Long Center.

Catechism classes are never as much fun – or as hilarious – as when they are led by Sister in the international hit comedy Late Nite Catechism by Vicki Quade and Maripat Donovan.

Become a part of Sister’s classroom in this uproarious piece of theater that takes audience members back-sometimes nostalgically, sometimes fearfully-to children they once were. The interactive comedy experience brings Sister into the crowd to reward good students with gifts, while abrupt moods swings cause Sister to scare the crowds.

The Catholic Register (Toronto) said, “The show appeals to Catholics and non-Catholics alike since ‘Sister’ clearly explains religious references in lighthearted ways while maintaining a serious tone that isn’t too preachy and far from being saccharine.”  The New York Times declared “Late Nite Catechism speaks to an audience much broader than the membership of any one church.”

Late Nite Catechism, which was nominated for an Outer Critics Circle Award in New York and recently won the L.A. Drama Critics Circle Award for Best Lead Performance for Maripat Donovan, is currently playing in New York, Seattle, San Francisco, St. Louis, Vancouver, Scottsdale, New Orleans, Los Angeles and Chicago, where it has been playing to full audiences since it opened in 1993.  Productions in Boston, Sydney and Melbourne recently ended after playing two years in each city.  While in Austin, Sister will be available for private classes and fundraisers through Entertainment Events, Inc. at (877) FUNNY NUN.