Journey 2: The Mysterious Island on DVD and Blu-Ray #GIVEAWAY! #Journey2 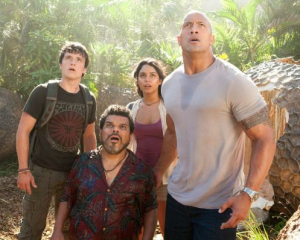 Warner Bros.  release of Journey 2: The Mysterious Island on DVD and Blu-Ray was June 5th 2012.

Sean Anderson (Josh Hutcherson, The Hunger Games) finds a hidden signal that he believes will lead him to his long lost grandfather (Michael Caine, Miss Congeniality).  With the help of his new step father (Dwayne “The Rock” Johnson, The Scorpion King), Sean finds a map and starts his adventure which leads him to Kailani (Vanessa Hudgens, High School Musical) and the island of Atlantis!  Sean and his friends battle giant bees, killer lizards, a volcano of gold, and electric eels to escape the lost city and make their way home!

10 thoughts on “Journey 2: The Mysterious Island on DVD and Blu-Ray #GIVEAWAY! #Journey2”