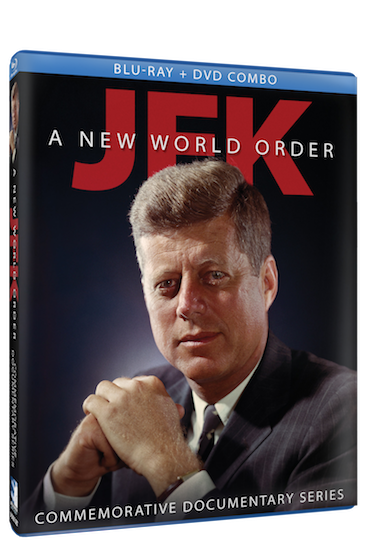 To commemorate the 50th Anniversary of the assassination of former president John Fitzgerald Kennedy, Mill Creek Entertainment is releasing an exclusive, historical documentary – JFK: A New World Order.  This brand new eight – part commemorative documentary series, which also contains over three hours of bonus content, is available as a BD+DVD combo for $14.98 MSRP.

Insightful and comprehensive, this documentary series is an in-depth chronicle of John F. Kennedy’s life from barely surviving birth to the years leading up to his decision to enter politics to the tragic events in Dallas on November 22, 1963 to the legacy he created.  Journey through the pivotal moments that created one of America s most beloved, influential and controversial figures through interviews with historians and archival footage that commemorate the man and the myth that is John F. Kennedy.

“This documentary was created to honor John F. Kennedy, his life and legacy.  We recognize that their was a void in available content about JFK’s entire life, and are proud to release one of the most in depth-documentaries available about our 35th president,” says Jeff Hayne, Vice President Content Acquisitions for Mill Creek Entertainment.

Over Six Hours Of The Myth And Memory of JFK The Man Who Captivated A Nation!

Fifty years after his death, President John F. Kennedy’s life and legacy continues to capture the hearts and minds of an entire nation.  Experience the history all over again as a new generation of Americans is introduced to the compelling story of this unforgettable leader, and the political dynasty that he left behind.  Insightful and concise, this eight – part documentary series covers the life of JFK, from his perilous birth to his dramatic assassination in 1963.