Halloween is ‘Deadliest Day’ Of The Year For Child Pedestrian Fatalities 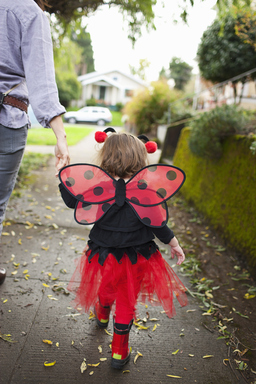 Kids have a greater chance of being fatally injured by a car on Halloween than any other day of the year, including the Fourth of July and New Year’s Day. State Farm®, the nation’s leading auto insurer, teamed up with research expert, Bert Sperling of Sperling’s BestPlaces, to better understand the risk kids face as they take to the streets in search of treats.
Sperling’s BestPlaces analyzed more than four million records in the Fatality Analysis Reporting System (FARS) from 1990 – 2010 for children 0-18 years of age on October 31. That detailed analysis revealed the following:
One hundred and fifteen child pedestrian fatalities occurred on Halloween over the 21 years of our analysis. That is an average of 5.5 fatalities each year on October 31, which is more than double the average number of 2.6 fatalities for other days.
Nearly one-fourth (26 out of 115) of accidents occurred from 6:00 – 7:00 p.m.  Over 60% of the accidents occurred in the 4-hour period from 5:00 to 9:00 p.m.
Over 70% of the accidents occurred away from an intersection or crosswalk.
Most of the fatalities occurred with children ages 12-15 (32% of all child fatalities), followed by children ages 5-8 (23%).
Young drivers ages 15-25 accounted for nearly one-third of all fatal accidents involving child pedestrians on Halloween.
Drivers ages 36-40 and 61-65 were involved in the fewest child pedestrian fatalities on Halloween. Together, these age groups accounted for nine child pedestrian fatalities (8%) in the 21 years of the study.
Each of the last six years of the study (2005 – 2010) has seen Halloween child fatalities below the 21 year average of 5.5.
“State Farm wants children to be safe every day of the year whether they are inside or outside of a car,” says Kellie Clapper, assistant vice president of Public Affairs at State Farm. “The analysis of this data highlights the particular need for parents to be especially alert during Halloween.”
State Farm and Sperling’s BestPlaces encourage responsible driving every day of the year, and especially this Halloween as costumed children fill the streets.  If you must drive, avoid all distractions, turn off the radio, put down the smart phone, and be alert for the unexpected. Fully engaged drivers can make 2012 the year of zero child pedestrian fatalities.
For additional child safety information, visit http://st8.fm/safekid.
For additional information about our findings, see http://st8.fm/Halloween
Methodology
Data from all fatal accidents was analyzed in the FARS systems for the most recent 21 years – 1990 to 2010. More than four million records were analyzed during that period, tallying the number of pedestrian incidents (including bicycles, tricycles, and other conveyances) for children 0-18 years of age, on the day of October 31st.
The primary source of our data for the analysis is the Fatality Analysis Reporting System (FARS). FARS is a data system conceived, designed, and developed by the National Center for Statistics and Analysis (NCSA) to assist the traffic safety community in identifying traffic safety problems and evaluating both motor vehicle safety standards and highway safety initiatives.
Fatality information derived from FARS includes motor vehicle traffic crashes that result in the death of an occupant of a vehicle or a non-motorist within 30 days of the crash. FARS contains data on all fatal traffic crashes within the 50 states, the District of Columbia, and Puerto Rico.
About State Farm®
State Farm and its affiliates are the largest provider of car insurance in the U.S. and is a leading insurer in Canada. In addition to providing auto insurance quotes, their 17,800 agents and more than 65,000 employees serve 81 million policies and accounts – more than 79 million auto, home, life and health policies in the United States and Canada, and nearly 2 million bank accounts. Commercial auto insurance, along with coverage for renters, business owners, boats and motorcycles, is also available. State Farm Mutual Automobile Insurance Company is the parent of the State Farm family of companies. State Farm is ranked No. 43 on the Fortune 500 list of largest companies. For more information, please visit http://www.statefarm.com or in Canada http://www.statefarm.ca
About Bert Sperling and Sperling’s BestPlaces
Bert Sperling is widely acknowledged as the leader in the field of “Best Places” rankings and research, with profiles in the New York Times and Wall Street Journal regarding his studies of quality of life in cities and towns. He and his studies appear regularly in the media, and he is the author of bestselling books, such as “Cities Ranked and Rated” and “Best Places to Raise Your Family.” His research firm, Sperling’s BestPlaces, operates the website www.bestplaces.net, which provides information and features to over 1.5 million visitors each month.