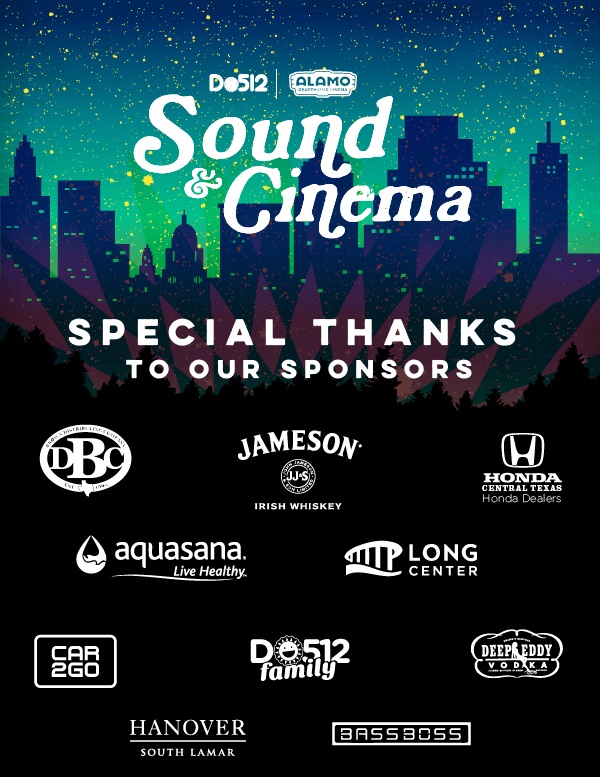 Austin, TX – Friday, May 22, 2015 – Alamo Drafthouse and Do512 are pleased to announce the return of their highly popular summer event series Sound & Cinema to The Long Center.

Now in its third season, Sound & Cinema 2015 features unique pairings of classic movies with a diverse array of local musical guests. Each band plays a musical tribute to the night’s movie, followed by a screening of the film on the Alamo’s giant inflatable outdoor screen – all against the backdrop of the Austin skyline. The six-event summer series will be held on the lawn at The Long Center on alternating Wednesdays. All Sound & Cinema events are free, family-friendly, and open to the public.

“When our friends at Do512 first pitched us the idea for what would become Sound & Cinema, we had no idea that we would be launching an annual tradition that’s come to be a defining part of Austin’s summer evenings,” says Henri Mazza, Alamo V.P. of Special Events. “We are incredibly grateful to Do512 and all of our partners for letting us be a part of these great events for the third year in a row.”

The lawn is open seating all afternoon, so everyone can feel free to hang out and grab a good spot on the grass whenever they’d like. Food trucks open at 6pm each night. The sunset concerts start around 7pm. Movies begin shortly after dusk. Guests are welcome to bring blankets and folding chairs. Pets and outside alcoholic beverages are not allowed. Parking is available in the Long Center garage, and there will also be extra bike racks at the Long Center for each event, as well as free car2go drop zone parking.

June 17: THE SANDLOT- With musical guests The Nightowls

For more information and details on each Sound & Cinema event, visit SoundAndCinema.do512.com