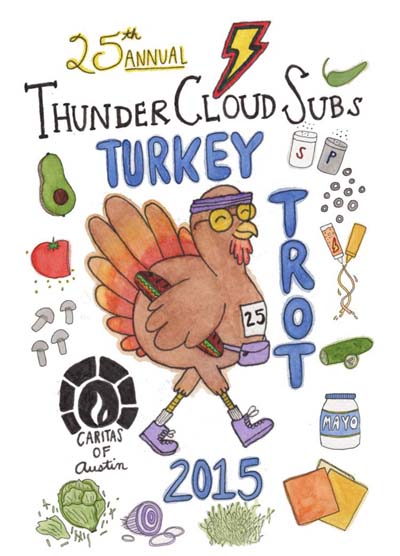 The ThunderCloud Subs Turkey Trot is a five-mile run, one-mile walk and a Kids K, beginning and ending at the Long Center for the Performing Arts. Register online at www.thundercloud.com/turkey-trot. All registrations include a T-shirt, runner’s guide, and donation to Caritas.

“For the past three years in a row, the number of registrations has hovered right around 21,000 runners. Our goal for 2015 is to register a whopping 25,000 people in honor of the Trot’s 25th anniversary,” Haggerty says.

Awards will be given to the overall first-place, second-place, and third-place male and female runners, as well as the top three men and women in each age group. Awards will also be given to the first place team and the top three finishers in the following categories: Maternity, Baby Jogger, Wheelchair, Longhorn, Red Raider, and Team Challenge. Participants who want to raise additional money for Caritas of Austin can partake in the Trot’s fundraising challenge for individuals or teams.

Some of the intriguingly-named teams signed up for the Trot are The Flying Dutchmen, Can’t Stop the Gravy Train, Gobble ‘til you Wobble, and We Got the Trots.

First Texas Honda is donating a brand new Honda Accord EX-L as the grand prize for the ThunderCloud Subs Turkey Trot Raffle, with 100 percent of ticket sales going to Caritas. Raffle entrants will also have the chance to win eight gift packages from Mellow Johnny’s with a value totaling $1,250.

Anyone can buy raffle tickets, whether or not participating in the Trot, and ticket-holders do not have to be present to win. Tickets are $25 each or five for $100. Raffle tickets can be purchased online at www.thundercloud.com, at packet pickup before the run, or through an authorized employee or agent of Caritas of Austin at the organization’s headquarters, 611 Neches Street. Winners will be announced on event day at 10:45 a.m.

For real-time updates on ThunderCloud Subs Turkey Trot news, events and happenings, like the Facebook page, and connect with ThunderCloud Subs on Twitter and Instagram, @TCloudSubs. To join in the online conversation, use #TCloudTrot.

For more information or to register for the ThunderCloud Subs Turkey Trot, visit www.thundercloud.com/turkey-trot.