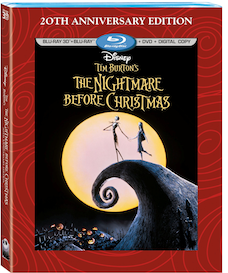 The Nightmare Before Christmas is in my top 10 most favorite movies of all time. I have loved Tim Burton movies since Beetlejuice. He is so unique and innovative. Now that I have children they have taken the torch of love for all that Tim Burton makes. I am so excited about this! 🙂

Bored with the same old scare-and-scream routine, Pumpkin King Jack Skellington longs to spread the joy of Christmas. But his merry mission puts Santa in jeopardy and creates a nightmare for good little boys and girls everywhere!