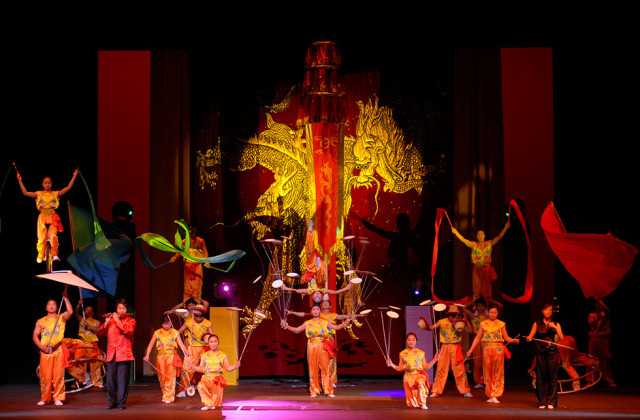 Straight from Dell Hall to Beijing and back,  The Peking Acrobats are returning to Austin in their 30th Anniversary Tour, featuring their centuries-tested, astonishing acrobatics February 28 at 3pm. Tickets are on sale now and start at just $29!

Austin may be known as the Live Music Capital of the World, but we’re also on the international map when it comes to yoga and other forms of aerial dance! The Peking Acrobats fit right in to Austin’s funky vibe with their gravity-defying feats of dexterity, flexibility, balance and athleticism.

It will be a great afternoon for the whole family, a first date or even just a fun, relaxing afternoon out with friends. Whether you’ve seen it five times or have yet to experience the wonder, The Peking Acrobats put on a show you have to see to believe.

Direct from the People’s Republic of China, The Peking Acrobats are a troupe of China’s most gifted tumblers, contortionists, jugglers, cyclists, and gymnasts complemented by live musicians playing traditional Chinese instruments.

Since their Western debut in 1986, The Peking Acrobats have redefined audience perceptions of Chinese acrobatics. They perform daring maneuvers atop a precarious pagoda of chairs; they are experts at trick-cycling, precision tumbling, somersaulting, and gymnastics.

Rooted in ancient Chinese traditions, yet totally mesmerizing to contemporary audiences, these spectacular routines are guaranteed to thrill audiences of all ages and backgrounds.

A performance by The Peking Acrobats brings with it the opportunity to experience the epitome of a rich and ancient folk art tradition with the addition of the pageantry and spectacle of modern Chinese Theatrical Circus. Each movement or action takes many years to practice and perfect.

Those who have seen The Peking Acrobats on any of their previous tours can be assured that they will see new, exciting acts and new twists to old favorites, celebrating THIRTY years of awesome entertainment!