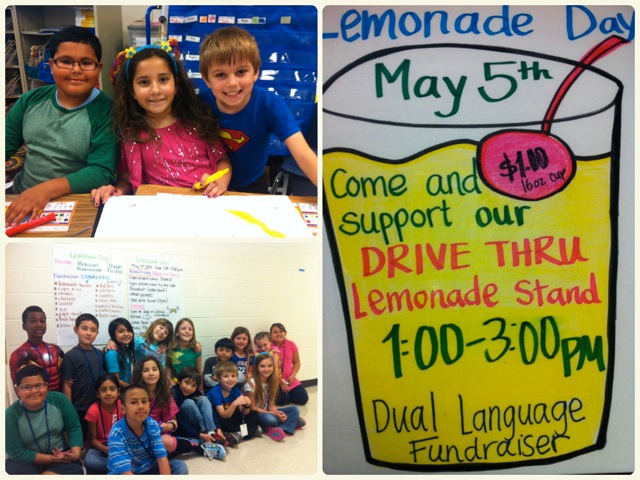 Lemonade Day Austin is a fun, free, event where kids get to make and keep the money that they earn. Kids of all ages learn to set goals, develop a business plan, establish a budget, seek investors, provide customer service and give back to their community. The foremost objective of Lemonade Day is to empower youth to take ownership of their lives and become productive members of society – the business leaders, social advocates, volunteers, and forward-thinking citizens of tomorrow.

Each child who registers receives a yellow backpack with an Entrepreneur Workbook that teaches them the 14 lessons of Lemonade Day, including creating budgets, setting profit-making goals, serving customers, repaying investors, and giving back to the community. Along the way, they acquire skills in goal-setting, problem solving, and gain self-esteem critical for future success. They keep all the money they make and are encouraged to spend some, save some, and share some.

“Lemonade Day helps kids begin to think like entrepreneurs,” says Eugene Sepulveda, president of the Entrepreneurs Foundation of Central Texas, sponsor of Lemonade Day Austin. “All successful business persons started out with a small business: mowing lawns, delivering newspapers or running a lemonade stand. By setting up and operating their own business, kids get to experience success and learn valuable lessons about how businesses operate. They’ll also learn about the value of saving and investing money, and giving back to the community.”

There were several exciting special events leading up to this year’s Lemonade Day Austin, including The Texas Round-Up 5K and the YMCA Healthy Kids Day, The Schlotzky’s Bun Run, and the Best-Tasting Lemonade Contest. This year, The Best Tasting Lemonade Contest, which was held on April 22 at the Austin Children’s Museum, had its biggest turnout ever. To see photographs and more, please go to http://www.facebook.com/lemonadedayaustin.