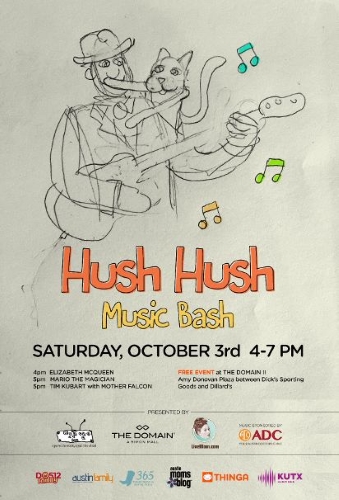 Although the tunes never stop in Texas’ capitol, with Austin City Limits around the corner, the volume may get louder than usual.  On Saturday, October 3, The Domain is joining forces with LiveMom.com and Spare the Rock, Spoil and Child to host Hush Hush Music Bash, a free music festival for kids.

“ACL is one of Austin’s biggest attractions and it’s one of our favorite times of the year here at The Domain,” explains Lea Willingham, General Manager.  “Thanks to the Hush Hush Music Bash, even the youngest of music fans don’t have to miss out on the influx of live performances and stellar lineups.”

Austin’s only after-party for kids is going down in Amy Donovan Plaza at Domain II on Saturday, October 3, from 4 p.m. to 7 p.m. With music sponsored by Austin Diagnostic Clinic, the afternoon features performers that will rock mini music lovers’ world—literally.

Elizabeth McQueen will kick off the bash at 4 p.m.  Known for her beautiful and timeless vocal style, McQueen’s music brings together the best of multiple genres into groovy, danceable art-form.  Next, Mario the Magician will hit the stage at 5 p.m.  Part retro, part rock-and-roll, Mario’s uplifting, highly interactive and ridiculously funny performance is sure to thrill the kids.  As part of a multi-city release for his newest album, Tim Kubart will perform “indie pop for all ages” with Mother Falcon at 6 p.m., finishing off a night that will have kids begging for more.

In addition to getting down and funky at the main concert, kids will enjoy dance competitions, a gaming zone provided by The Microsoft Store, cupcake decorating with Baked by Amy’s, a music station and more.