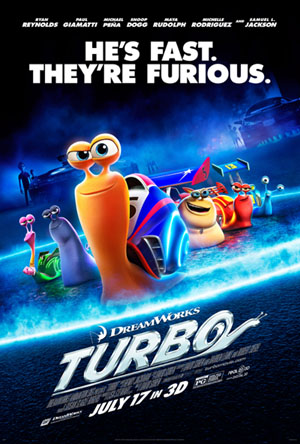 I am a little late on this post, but I bet there are a few parents out there who have not taken their children to see DreamWorks Turbo.

From the makers of Madagascar and Kung Fu Panda, TURBO is a high-velocity 3D comedy about an underdog snail whose dreams kick into overdrive when he miraculously attains the power of super-speed. But after making fast friends with a crew of streetwise, tricked-out es-car-goes, Turbo learns that no one succeeds on their own. So he puts his heart and shell on the line to help his pals achieve their dreams, before Turbo-charging his own impossible dream: winning the Indy 500.

Most often when I go to movies there is always a point where I want to see what time it is. When watching Turbo it did happen but it was 5 min from the end of the movie. So in my book, that is a great sign!

My girls loved this movie! There were so many colorful and funny characters. I can’t tell you how many times the theater was filled with laughter from children as well as parents. I do not want to go in to too many details about the movie. But I think different people get a different message from the movie. For me it was:  It does not matter how big or small you are, you should always go for your dreams.

We saw the Turbo in 3D, I would say it is a bonus but not required.

Disclosure / Disclaimer: No monetary compensation was obtained for this post. I received a complimentary tickets to facilitate this review. The opinions expressed here are mine and may differ from yours.