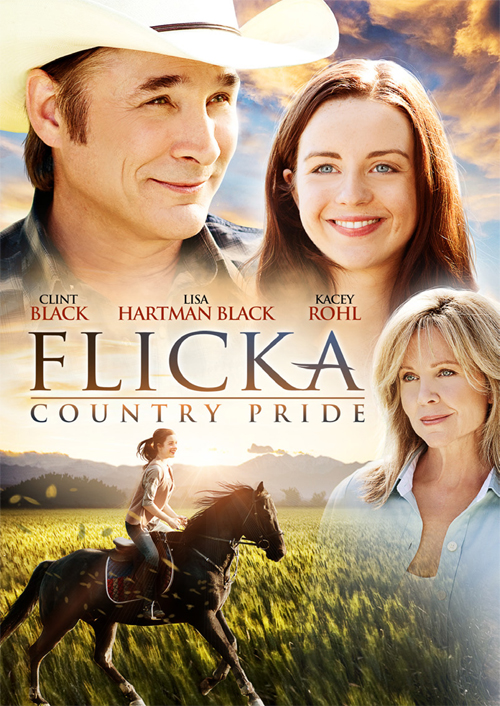 I was excited and overwhelmed when I was contacted to interview actress and singer Lisa Hartman Black. I have never interviewed any one before. One of my friends April told me “Just remember that she’s a person, the same as you. She’s probably nervous before every interview too! :)” She was so right! Mrs. Black could not have been nicer. I am just sad it was such a short interview.

CTM: I think it is great that you, your husband and daughter could work together in this movie, did that work well?

Lisa Hartman Black: It did. You know, the studio really developed it for Clint (Black). He was in the second Flicka. Every one really loved the character Toby. I can’t blame them. They created Flicka: Country Pride for him. Then they offered the role to me. Then our daughter asked if there were any kids parts in it. We said yes so she learned the script and had a screen test and got the role. It ended up really being the Flicka 3, we all called it the Flicka 3, we were the Flicka 3. It all just ended up working out beautifually. Like it was ment to be. We all had a great time. Our daughter’s school was very supportive. We had a teacher on location that was brilliant. I would do it all again in a heartbeat.

CTM: Sounds like a dream situation for a mom. Being able to work with your whole family.

Lisa Hartman Black: It was, it was really great!

Lisa Hartman Black: Absolutely! You know, I have played a lot of mom’s and now that I am one in real life it just deepens every thing. Reading the script I was crying through the whole thing. However emotionally loaded I was was, it from life experiences. Loving Kelly (Kacey Rohl ) was very easy. She is a very lovable young woman in real life. So, that made it even better. You never know who you are going to be working with. She was just lovely in every way.

CTM: This movie has some really great messages for kids and famies in general. What is the one message you hope they get from watching Flicka: Country Pride?

Lisa Hartman Black: You know, there are so many, I think staying true to who you are. This young girl loses her dad, it’s unimaginable. But she came back around and stayed true to her self. And got back on the horse and got back into her life.

When Toby (Black) takes on a job at a stable with Flicka in tow, the owner’s teenage daughter Kelly (Rohl), quickly bonds with the wild horse. A budding equestrian rider, she hopes to break Flicka for an upcoming competition, despite her mother’s (Hartman Black) disapproval. With the competition approaching, a rival trainer stealing business, and a growing fear they may be forced to sell the stable, Toby steps in to turn things around for Kelly and her mother.

Lisa Hartman Black made television history as the only prime-time TV character to be killed off one season and brought back by popular demand to the same series as somebody else—on “Knots Landing.”

Hailing from Houston, Texas, her first series was “Tabitha,” a spin-off from “Bewitched,” which she followed up with the mini-series Valley of the Dolls, then moving on to “Knots Landing.”

After “Knots Landing,” she brought her acting prowess and high TVQ to a formidable array of network movies-of-the-week and mini-series, starring in The Operation, Roses Are For The Rich, Beverly Hills Cowgirl Blues with James Brolin, Not of This World, Fire! Trapped on the 37th Floor, The Return of Elliott Ness, 2000 Malibu Road for producer Aaron Spelling, Without A Kiss Goodbye, The Search for Grace, Someone Else’s Child, Judith Krantz’s Dazzle, Have You Seen My Son, and, with her husband Clint Black, Still Holding On: The Legend of Cadillac Jack, on which she played the wife of rodeo champion Jack Ponder and was also executive producer.

She took time off to give birth to a daughter, Lily Pearl, in 2001, and then returned to acting, starring in Back To You and Me for Hallmark. Nowadays she can sometimes be seen on tour with her husband performing their Grammy-winning duet “When I Said I Do” and the duet “You Still Get To Me.” She is based in Nashville and Los Angeles.