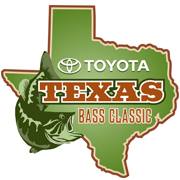 The 2015 Toyota Texas Bass Classic – an event which draws the world’s top professional bass anglers — has been set for Memorial Day weekend, May 23-25, at Lake Fork.

“After a world-record setting event in 2014 we are very excited to return to Lake Fork in 2015,” said Lenny Francoeur, tournament director. “The Quitman community has been so welcoming and the bass fishing at Lake Fork is world-class. We can’t wait to get back there next spring.”

In addition to new dates, tournament officials announced the field size will be refined from 50 contestants to 38 of the world’s best professional anglers.  The 2015 classic will invite the top 15 in 2014 Angler of the Year points from both the FLW Tour and Bassmaster Elite Series, 7 exemptions and defending 3-time champion Keith Combs.

All 38 anglers will compete on Lake Fork for the first two days, with the field being reduced to the top 10 for the final round on May 25. The tournament will remain a non-entry fee event with all anglers receiving guaranteed prize money. Through a continued partnership with the Texas Parks and Wildlife Department, the classic will continue to focus on conservation and adhere to a strict catch, weigh and immediate release format. Over the last eight years, the TTBC has donated more than $2 million to TPWD, an effort that will continue in 2015.

“We were proud to see the record-setting fish catches at the 2014 event,” said TPWD’s Dave Terre. “Those catches were a direct result of our progressive fisheries management practices, including special fishing regulations, fish stocking, and fish-habitat improvements with the Sabine River Authority. This tournament, including its unique catch-weigh-immediate release format, gives us the opportunity to show the world just how good Lake Fork really is.  We are thankful for the opportunity to do this again in 2015 and also for all the benefits this event provides to TPWD.”

Anglers qualifying for the classic join a prestigious rank of past competitors. By drawing from the two major tours, the TTBC field consistently boasts the very best anglers in the world every year.

TTBC in 2014 was one for the record books, helping to show the world how amazing a fishery Lake Fork truly is.  The previous record for a three-day, tour-level event was set in 2000 at the Bassmaster California Western Invitational on Clear Lake by Byron Velvick with 83 pounds, 5 ounces (15 fish). That record was broken eight times on the final round of the 2014 TTBC.

Keith Combs, the new title holder, reeled in a three-day weight of 110 pounds (15 fish). That broke the existing record by 26 pounds, 11 ounces. Additionally, two of the anglers – Combs and Stetson Blaylock — entered the Century Club (more than 100 pounds). That had never happened at a three -day tour event. But Lake Fork is not your average bass fishery, and Combs’ is not your average champion.

“It’s a major career achievement just to qualify to fish the TTBC, but to be a three-time champion against the best anglers in the world, and to set the world record last year, it’s just amazing,” said Combs. “I am so proud to represent my home state of Texas, , but I am especially proud of the great things the TTBC does to raise awareness and funding for Texas Parks and Wildlife.”